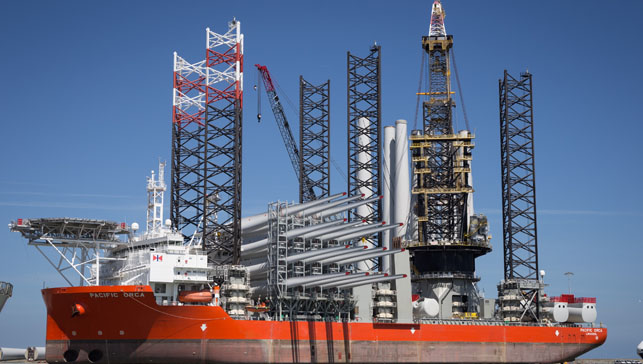 In March and April 2017, we worked on one of the major mobilization projects we have had this year. TS Tech is a specialist in mobilization, and a large part of our business consists of doing these tasks. We do both small and large mobilizations, like Pacific Orca.

Pacific Orca is the second largest ship in the world in offshore support vessels. The ship is built for the purpose of transporting wind turbines. She has an installation capability of up to 12 wind turbine generator (WTG) of 3.6MW each. The ship is owned by Swire Pacific Offshore (SPO), a shipping company based in Singapore.

The ship was in Esbjerg to do a task where TS Tech was brought in to do the mobilization. The task was extensive, requiring both time and manpower.

The task has consisted of doing installation on the entire tire. The two monopiles have been removed to make room for the wind turbines, blade racks have been set up for wings in the center of the ship, made walkways and a lot of lights. Furthermore, there were cranes set up, power grids for tools and much more.

A mobilization makes the ship ready and adapted to ship the individual wind turbines, as well as it prepares the ship for the given situation in the actual installation process of the wind turbines, out at sea.